Which audio input is the best?

Which Audio Input is Best?
Get the Most Our of Your Speakers

You finally bought a new pair of powered speakers, or an entire sound system, only to find plenty of confusing stuff on the back with some weird markings whose meaning you can’t discern. What’s RCA or Coax? Should I go for digital or analog audio? Allow us to explain the difference.

Analog audio signal is audio information provided in an analog form by analog audio outputs. For example, a record player is a good example of an analog audio output device. Its needle follows a physical groove pressed onto the record and converts it to an electrical signal. This signal is then transferred to a preamp (either external or built-in), then to an amp, and finally to an audio input in our YU6 speakers or any other powered speakers.

In an analog system, signal parameters, like the amplitude, frequency, etc., are copied in a manner analogous to the original soundwave. In other words, an analog output provides a continuous, constantly variable, analog signal that represents physical measurements of a soundwave sent to analog audio input speakers.

Analog audio input speakers are usually connected via RCA cables, also known as phono cables, with two RCA connectors on each end – one for each channel. They’re also color-coded or marked as “left” and “right”, so you’d know which connector belongs to which audio channel.

RCA connection usually carries two types of signals: line-level, which is reasonably loud, and phono, which is quiet and needs to be amplified; otherwise, the speakers won’t get very loud. Most modern audio outputs provide a line-level signal; the only notable exceptions are turntables which outputs a phono signal.

Luckily, some modern powered speakers feature a built-in preamp that allows you to feed the phono signal into the speakers and get satisfactory sound volume. In addition, some powered speakers, like Kanto TUK, have a dedicated phono input. Another way to connect analog audio is through an AUX input, using a 3.5 mm connector, which generally carries line-level signals similar to RCA. 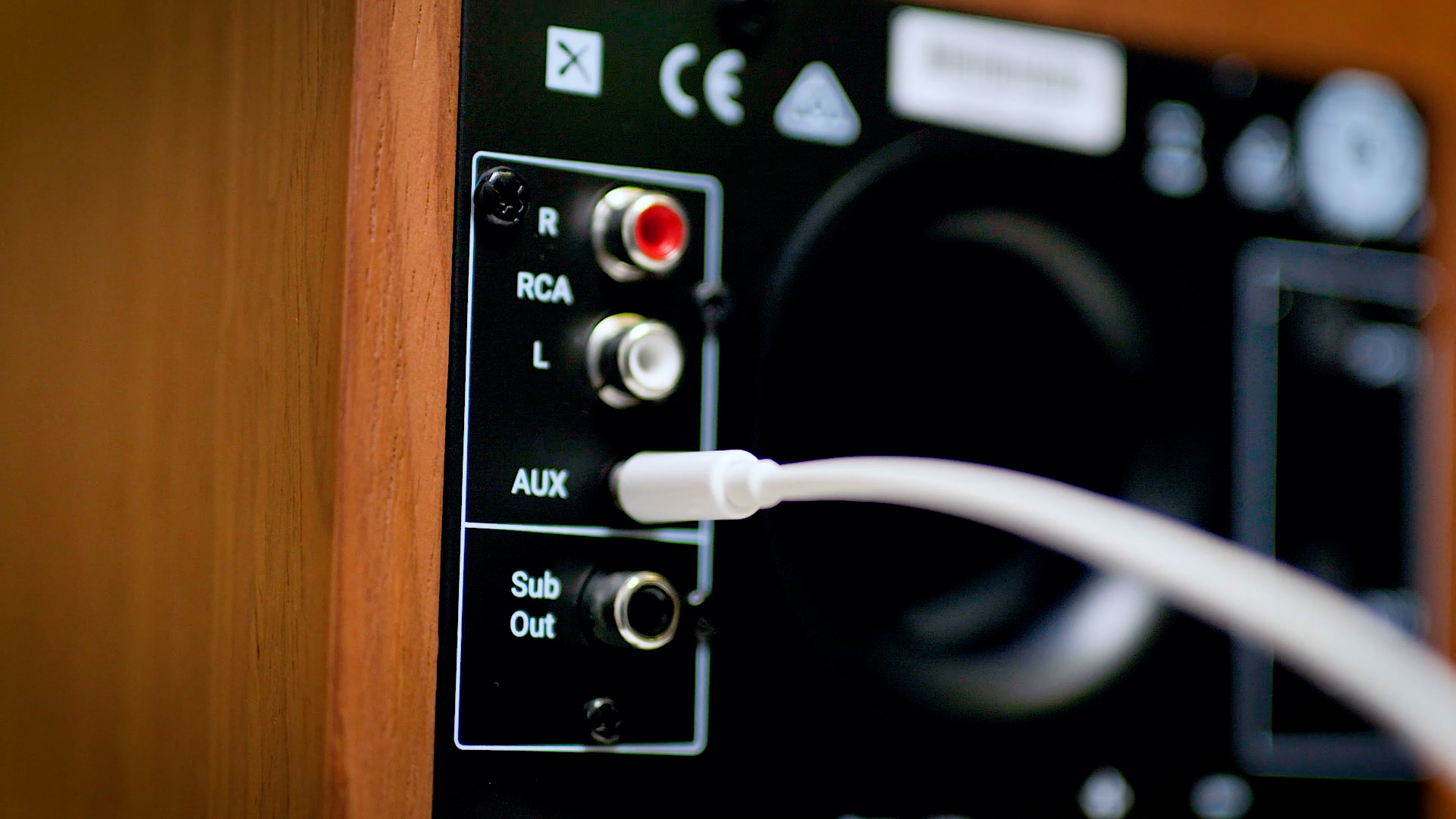 Analog audio is the accurate representation of sound in its natural waveform. It’s simple and allows for easier real-time processing. In addition, the signal cannot be colored by electronics, which is preferred by certain listeners.

Analog signals are very susceptible to external influences, which may significantly affect the sound quality. For example, not only is the cable used to transfer signals susceptible to interference but the poor cable quality and poor-quality connectors may introduce hiss and static noise due to electromagnetic interference (EMI).

And since the sound is analog by nature, it has to be converted to a digital form so that it can be stored or played on your PC, phone, or another audio-capable digital device. For example, an analog signal from a mic input is fed into an analog-to-digital converter (ADC), to convert analog signals to a digital value before storing.

This analog signal value is sampled at discrete time intervals, known as sampling rates. The precision of said conversion is represented by the number of samples per second or hertz and is usually measured in kHz, e.g., 48kHz or 48,000Hz. The incremental “steps” of the digital signal actually approximate the constantly variable value of an analog signal at an incremental rate (sampling rate).

Digital audio needs to be converted back into an analog signal that drives the speakers. So, why the extra step? Well, digital audio facilitates easier, more convenient storage, playback, and signal transfer over the analog, at least in this day and age.

Luckily, modern equipment uses a broad range of digital audio inputs to transport music from one piece of equipment to the other. Here are some of them:

People use USB Audio inputs because of the poor quality of built-in DACs in their computers. This is somewhat reasonable, as computer manufacturers usually focus on computing power than audio quality.
Some speakers, like Kanto TUK, use USB Type-B connectors for audio input. Your playback device, let’s say a PC, can output sound through a USB port in the form of a digital signal. This signal passes through the USB cable into the speakers, where the speakers’ built-in DAC converts it into an analog soundwave. 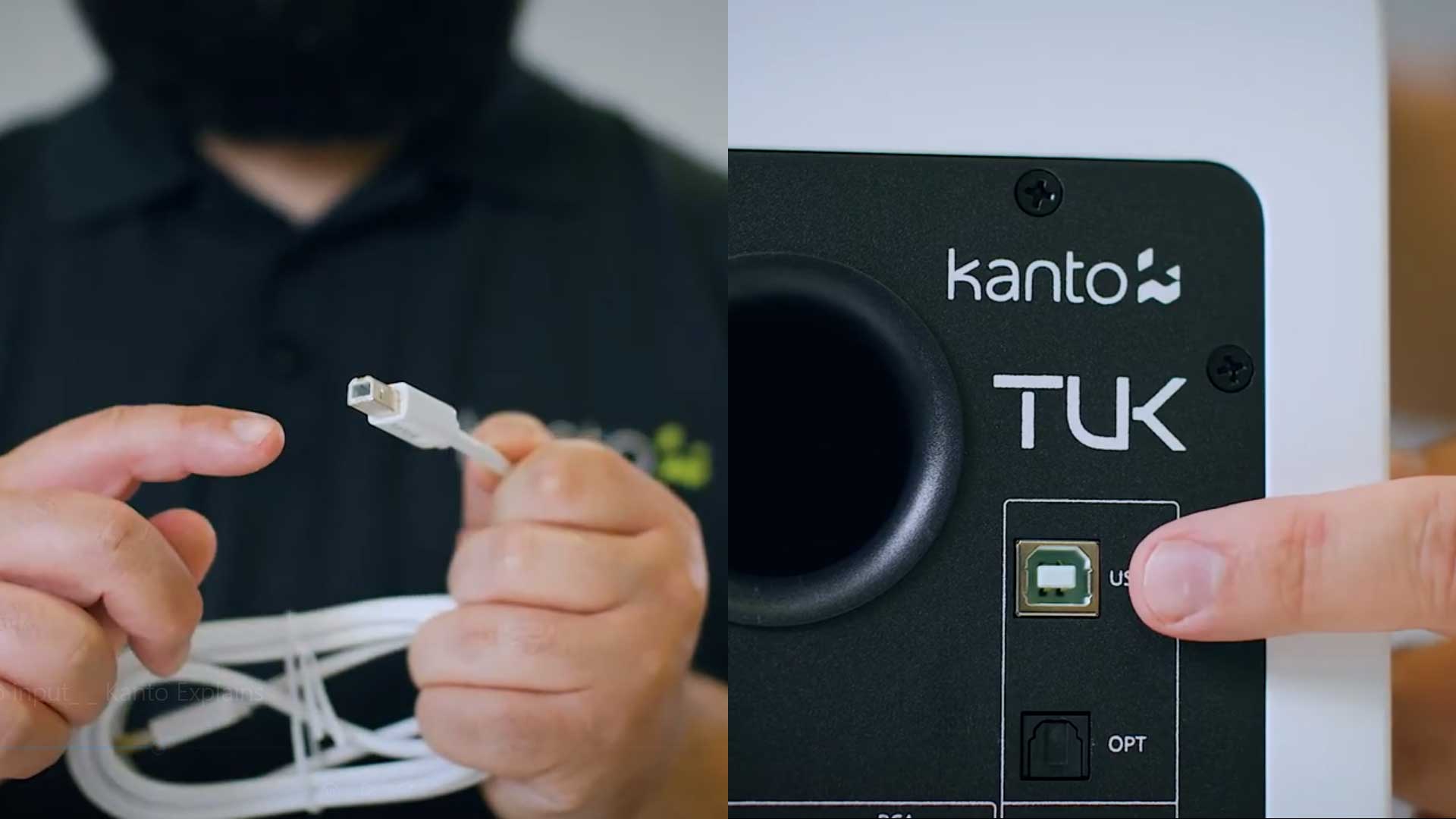 USB ports are implemented in almost any consumer electronic and are quite simple to use by design. In addition, the USB standard allows for auto-configuration in nearly every major operating system, including Windows and iOS devices such as Macs and iPads, though you might have to get a USB-to-Lightning adapter.

The main disadvantages of USB audio are that not all devices output music via USB, and this is only limited to computers and mobile devices. Home electronics, which may or may not feature a USB Audio Input, rarely output audio via USB.

Optical audio output/input works by converting the digital signal into light, which is then transferred via a cable made from optical fiber. The optical digital audio connection transfers S/PDIF digital audio between the output and the optical audio input on your Kanto TUK, YU4, and YU6 speakers. 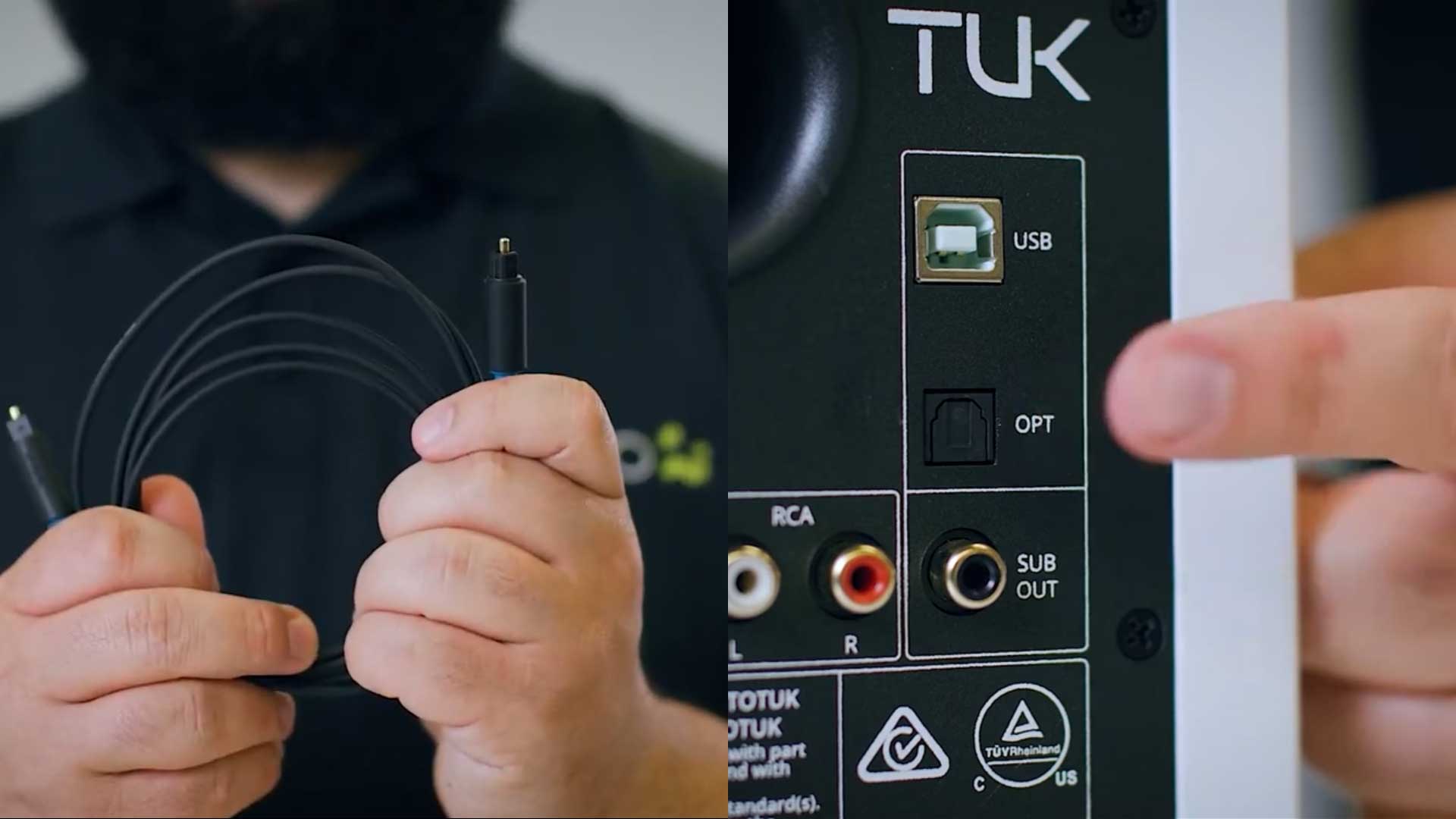 Optical audio generally provides better quality signal transmission as it’s unable to pick up EMI. The signal is either represented flawlessly, or not at all. The audio signal is duplicated perfectly resulting in clearer sound and better channel separation. It can also pass surround audio signals but keep in mind our two channel speakers only accept stereo signals.

Disadvantages of optical audio input are the same as with all digital signal transfers – signal loss over cable length. The light eventually scatters due to optical imperfections over the length of the cable resulting in an unreadable signal. So, the longer the cable runs, the more likely you won’t hear audio. This makes optical audio better suited for short cable runs. For longer cable runs, coaxial audio is perhaps a better idea.

Bluetooth transfers your audio wirelessly, without any physical connection, and the receiver is inside Bluetooth-enabled powered speakers. But the stereo sound transfer method alone differs from the Bluetooth transmission commonly used to transfer data.

Instead, Bluetooth Audio uses high-quality codecs that “compress” the audio and send it via a wireless connection to the speakers, which then “decompress” the signal into digital and route it through a built-in DAC to get the analog signal needed to drive the speakers. 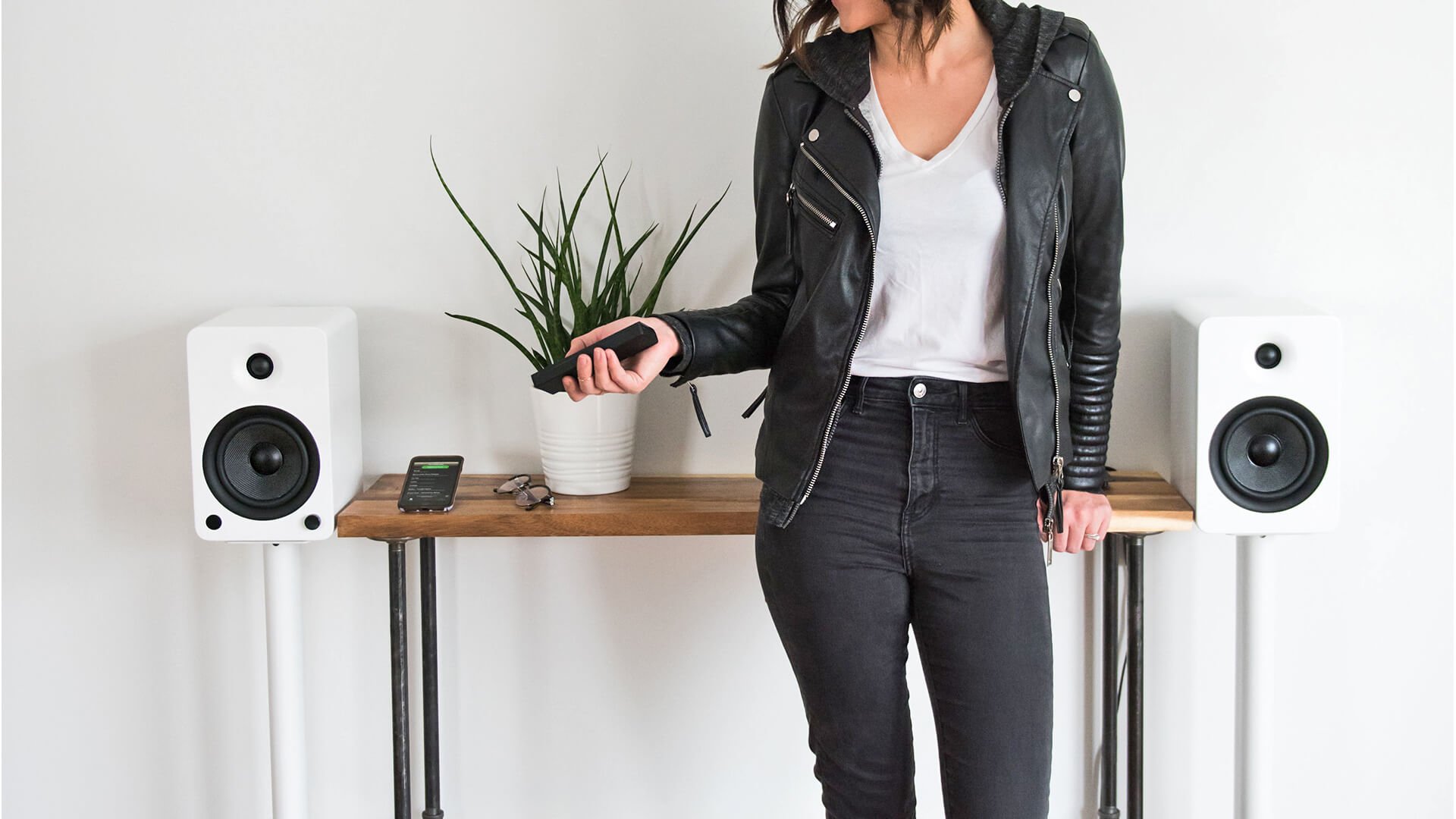 Bluetooth audio is incredibly versatile, as it allows you to connect any Bluetooth-enabled device that’s capable of reproducing music. Additionally, you can enjoy cordless music and an aesthetically clean setup without any cables hanging around.

The single disadvantage of Bluetooth is its range, which is approx. 30-65 feet, or 10-20 meters, and the signal weakens the further away you are from the receiver. Additionally, standard Bluetooth codecs transmit audio in a range of 300Kbps, which is considerably lower than CD quality. Higher end codecs like the aptX HD codec found in Kanto’s TUK speakers can pass CD quality audio as long as the audio source can transmit that codec.

Selecting the right type of audio input largely depends on your applications and equipment types – not all types of kanto products have the same input options.

Analog signal has unlimited bandwidth, and you can move it into a higher resolution without sacrificing its original quality. However, it’s stored on physical mediums, such as vinyl and magnetic tape, which have imperfections that cause popping and cracking noises. Additionally, the RCA and AUX cable can pick up radio frequency and/or electromagnetic interference along the cable length, causing hissing and static noise.

On the other hand, digital media is highly mobile and allows for infinite playback and copying without loss of quality over time. The downside of digital audio is the higher signal-to-noise ratio, which can create a digital noise. With that said, digital is a more preferred method, as it can’t pick up any radio frequency and/or electromagnetic interference.

Ultimately, there’s no clear-cut winner, as different scenarios and personal preferences dictate different setups. If you want to learn more about audio components such as speakers, DACs, and different types of audio inputs and outputs, please visit our blog, or visit our Youtube channel for more great content. 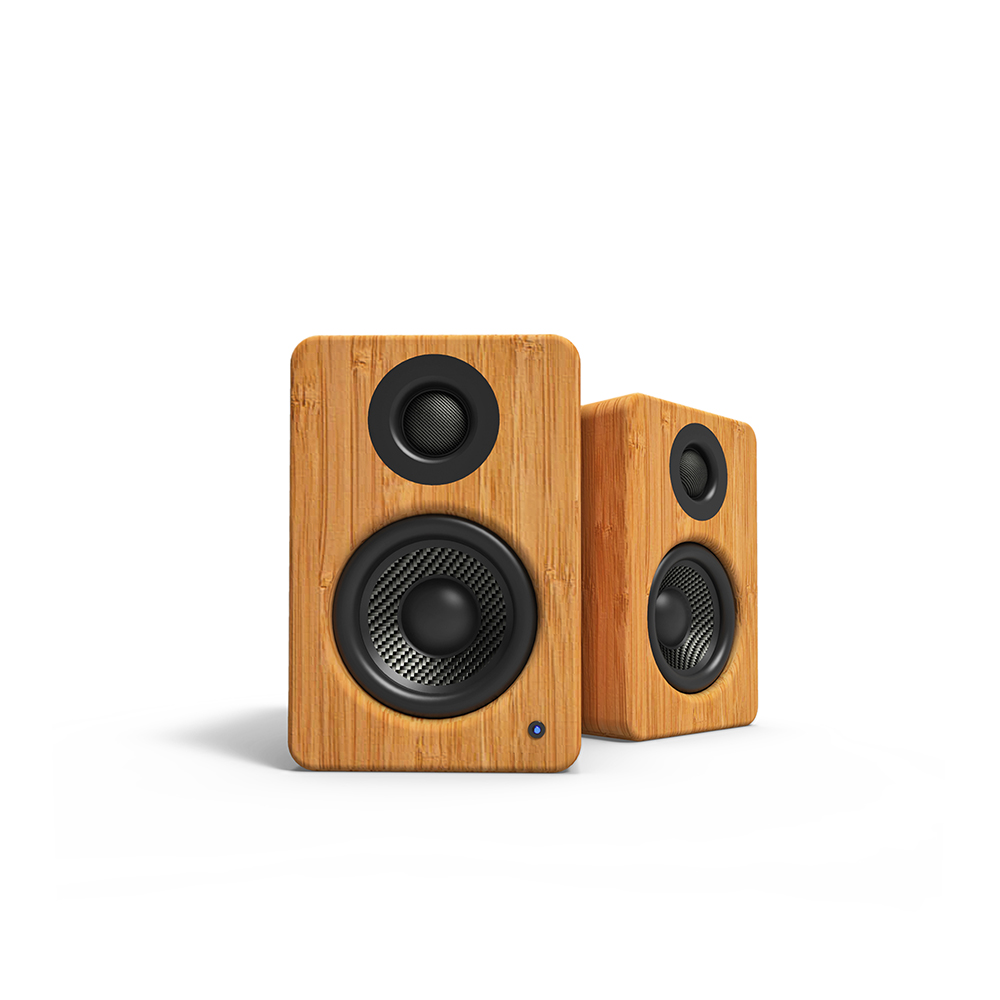 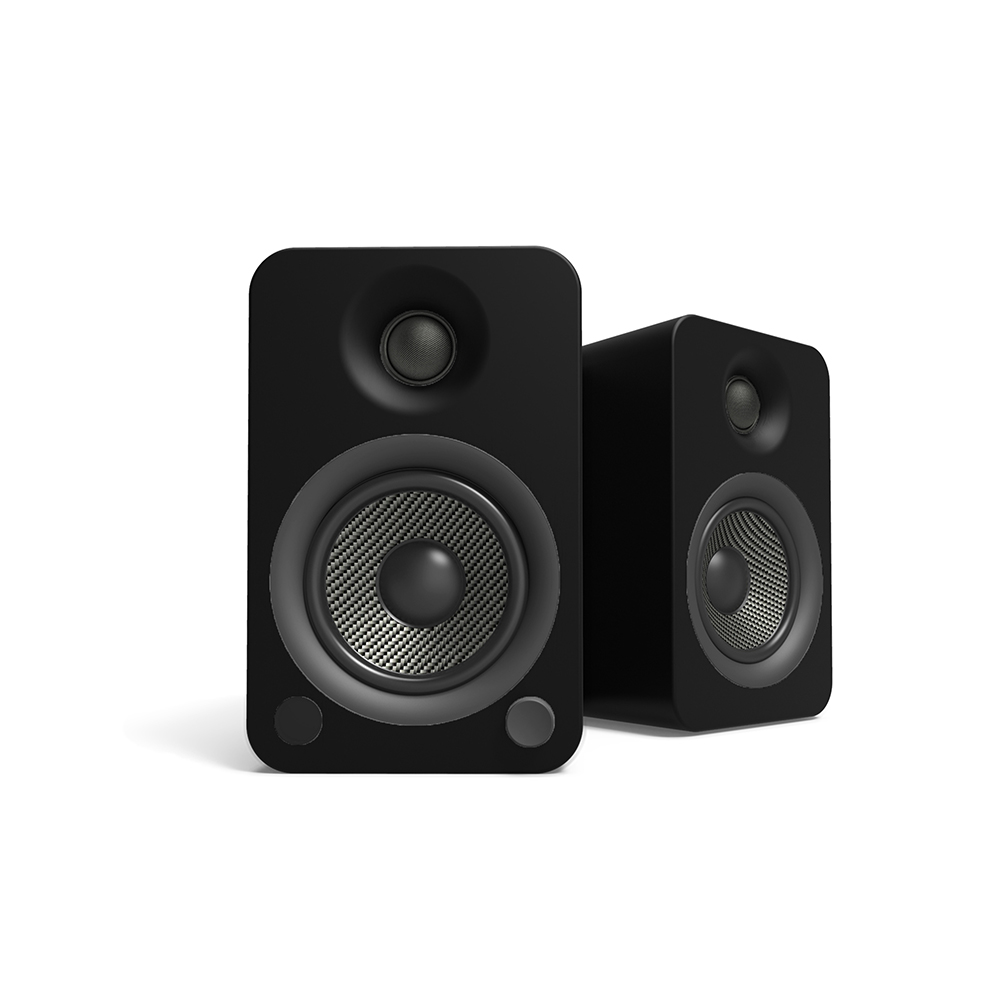 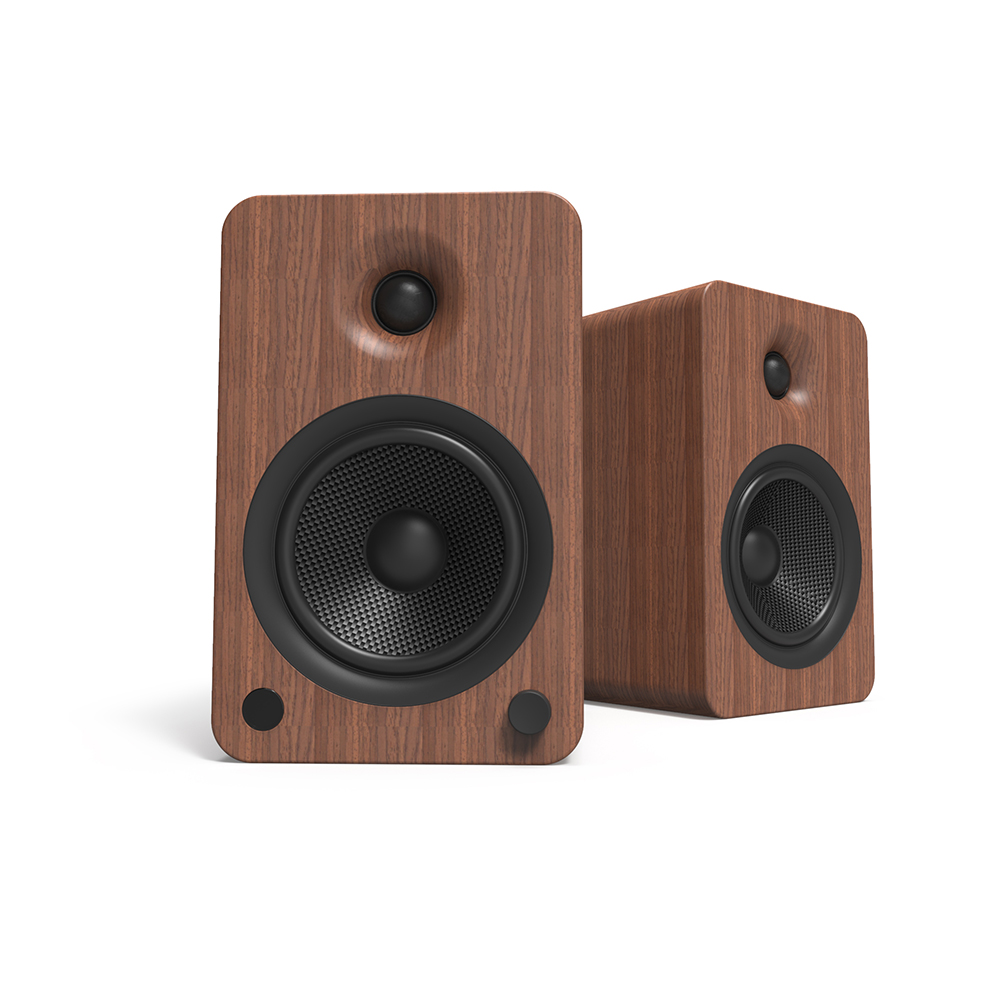 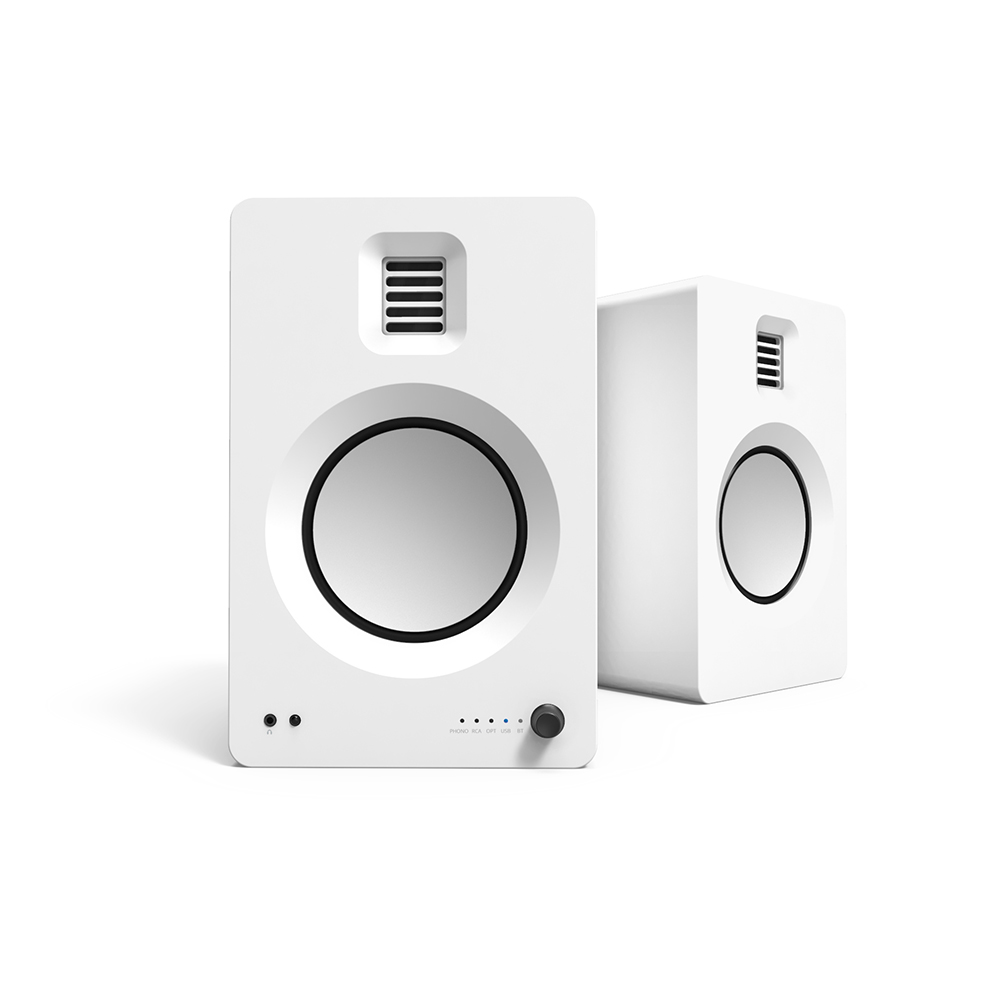