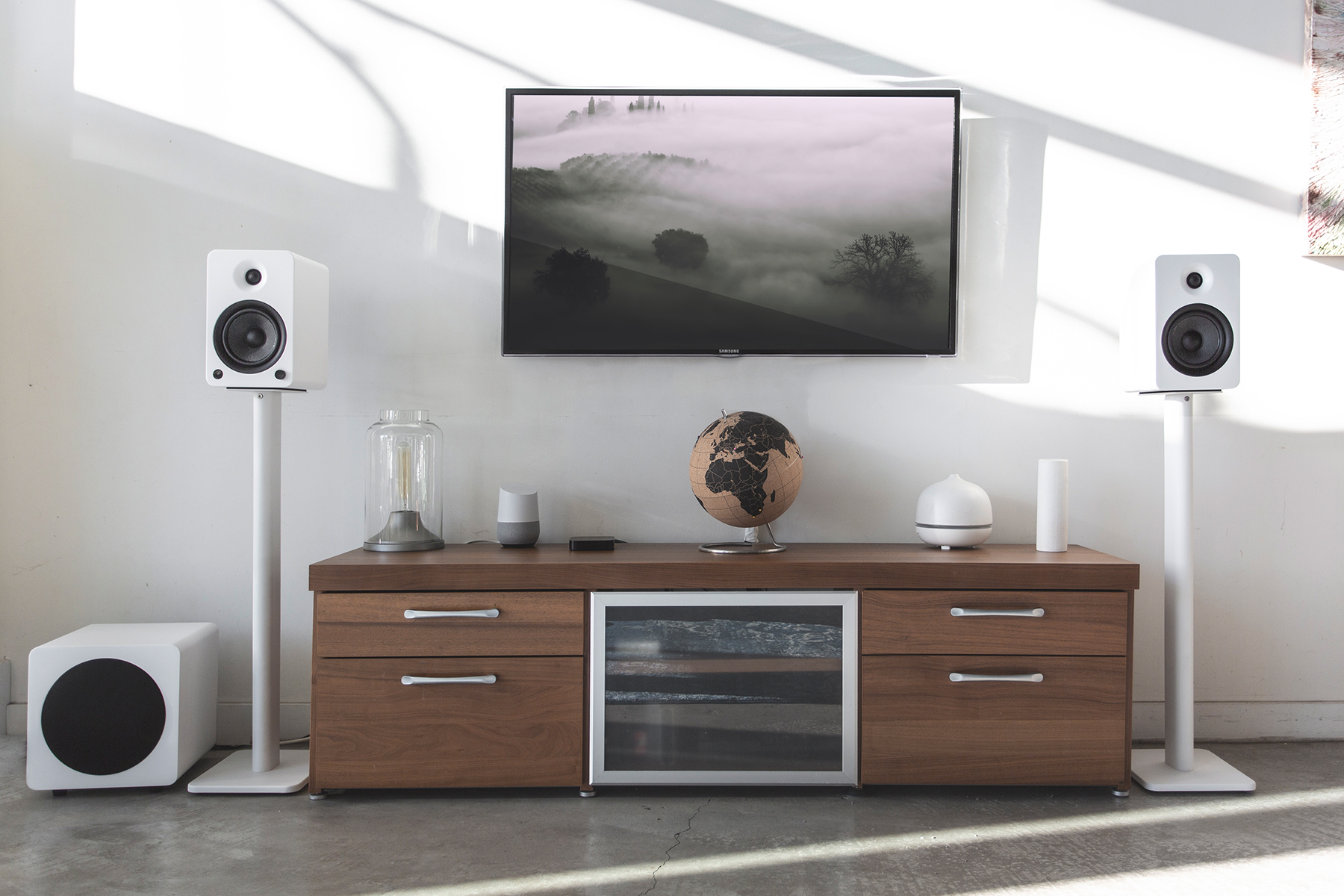 There’s one thing we can all agree with – the sound coming from modern TVs is lackluster. It wasn’t always this way, but as manufacturers continue to make TVs thinner, it is becoming increasingly more difficult to include capable speakers. Most TV speakers don’t even face forward anymore. They point downward or backward and produce muffled audio. If you’ve ever had to rewind a movie to listen to what a character has said, you’ve experienced this first hand.

Fortunately, you don’t have to live with poor sound quality. There are many different options for upgrading your TV’s sound that cover the full gamut of budgets and complexity. The two most common upgrade paths are soundbars and surround sound systems, but there’s a third option that perhaps you haven’t considered. Powered stereo speakers remove the complexity and high costs associated with surround sound systems and offer better sound quality than soundbars. We’ll be covering the pros and cons of these three different options, so you can make an informed choice for your home theatre setup. 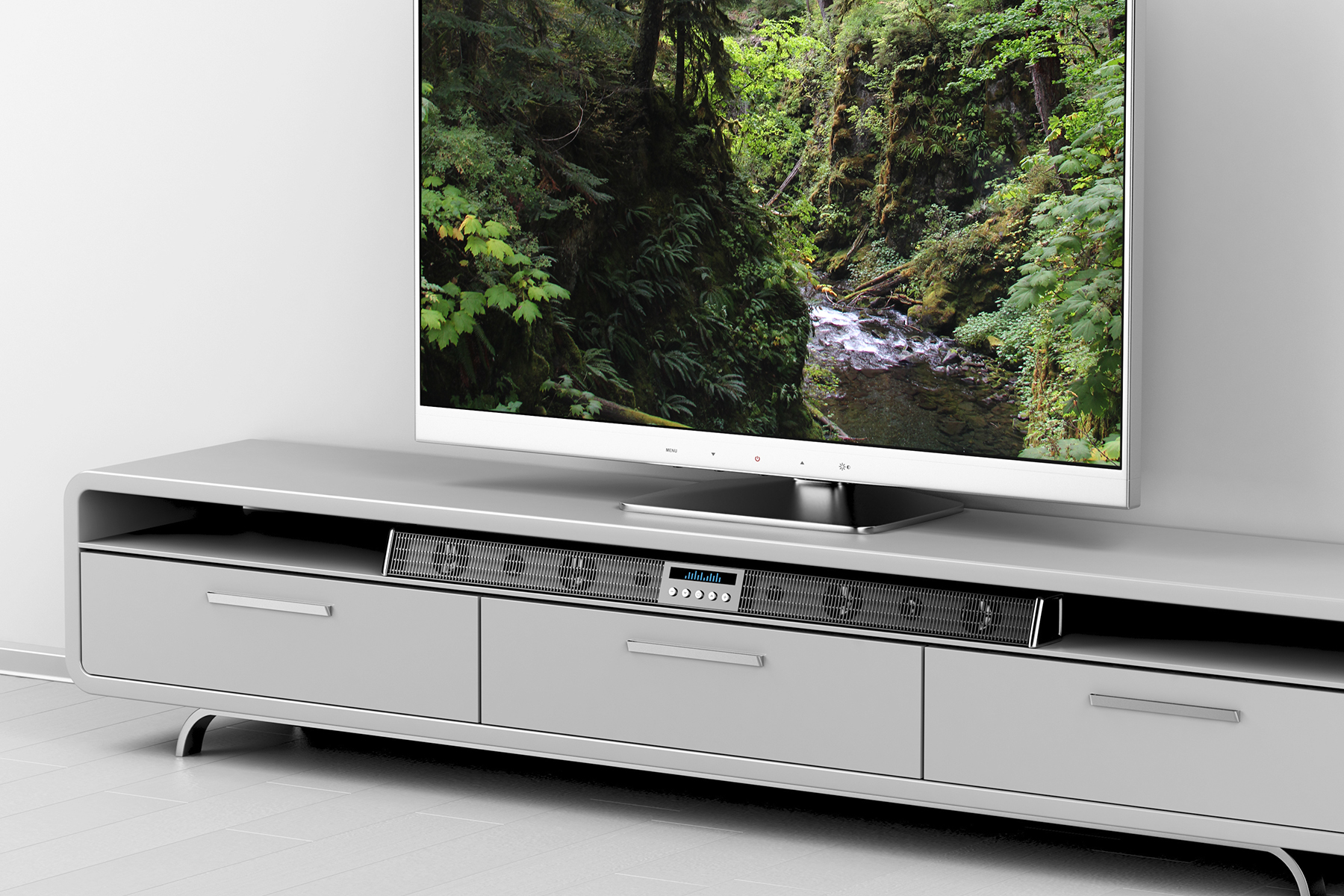 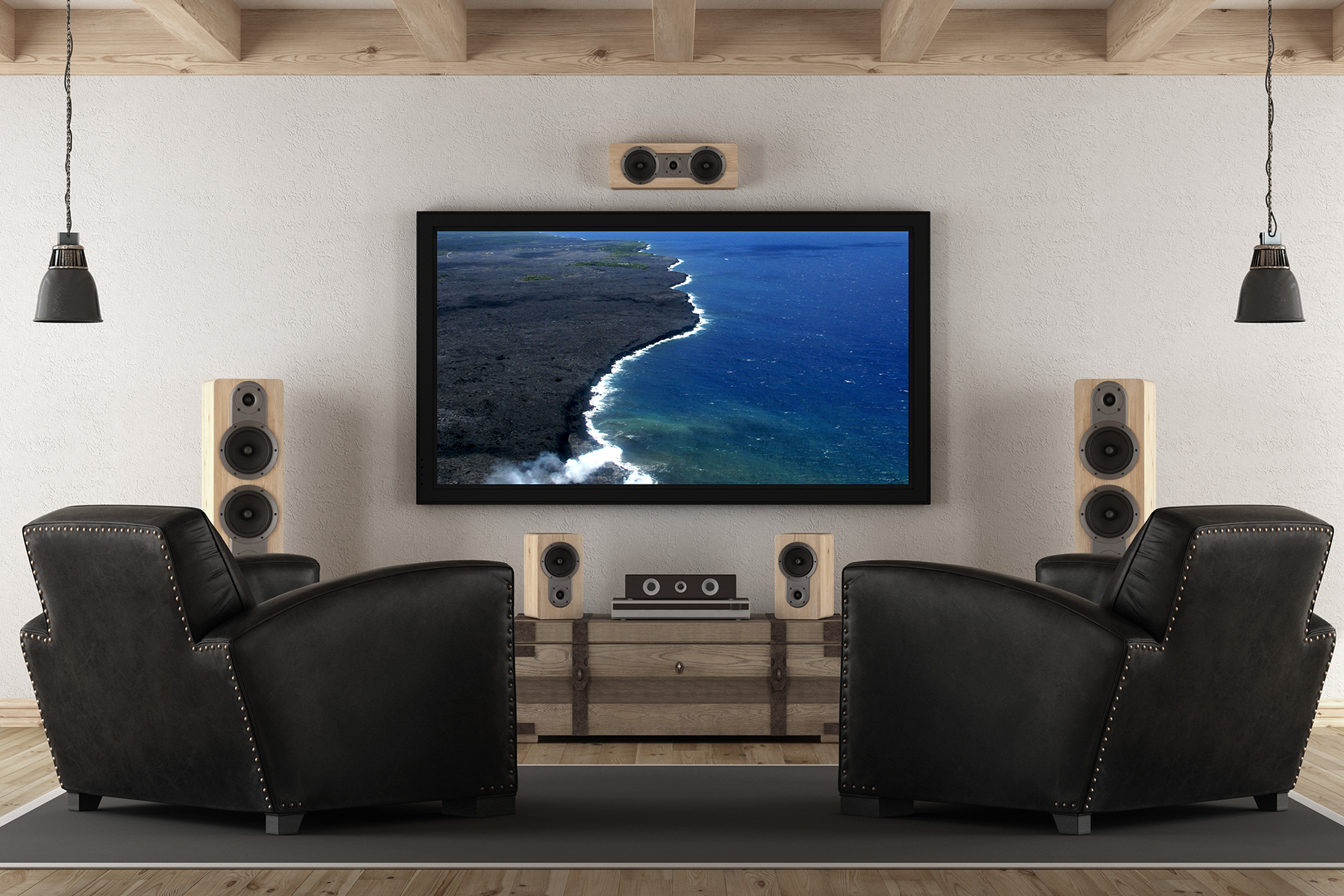 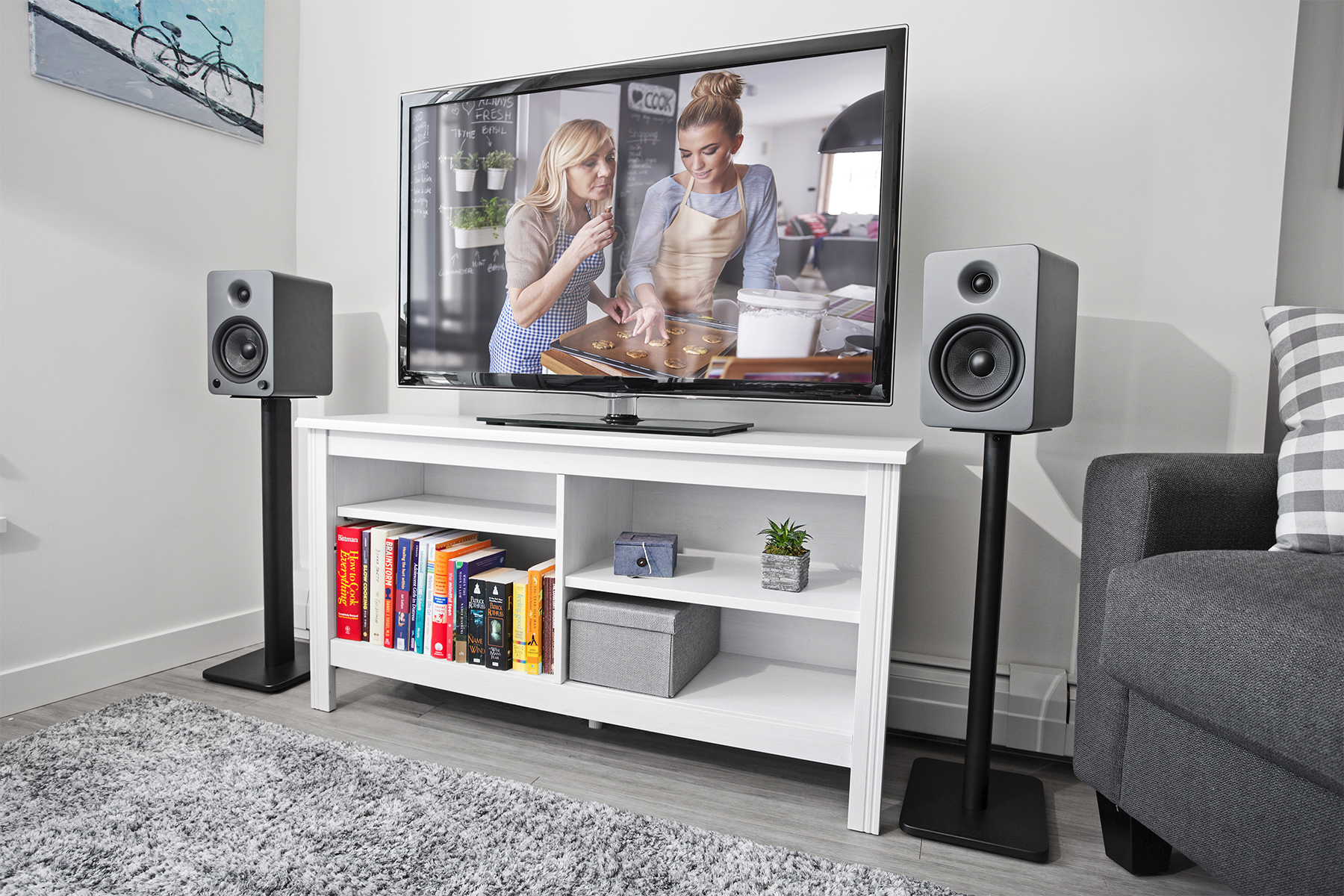 Soundbars are the simplest, and often the most economical, solution to upgrading your TV’s sound. They are generally compact, giving you flexibility over their location. Some can even be attached to your TV, which can free up space and allow you to position the soundbar along with your TV if your TV is mounted.

If you have a modern TV with an HDMI ARC audio output and the soundbar also has an HDMI audio input, you will be able to control the volume of the soundbar using your TV’s existing remote instead of relying on a second remote.

Soundbars that can simulate surround sound will play any audio format that your TV sends to it. You don’t have to change your TV’s sound settings – it should just work.

Because soundbars are designed specifically for use with TVs, they often lack connectivity. It is common for soundbars to have Bluetooth but less common for them to have analog inputs to connect turntables or older audio devices.

The diminutive nature of a soundbar means it is reliant on a subwoofer to fill in the low end that the soundbar cannot produce on its own. Traditional subwoofers only play sub-bass, the type of bass that is felt rather than heard. The subwoofers that come with soundbars are tasked with not only playing sub-bass, but also playing upper-bass to compensate for the soundbar’s lack of bass. This means that you may hear low, bassy voices coming from the subwoofer rather than the soundbar. If you’ve positioned the subwoofer away from the soundbar, it may feel like you’re hearing sound from two different places. And while most soundbar subwoofers are wireless, it is still one more thing that you need to find the space for and run a power cable to.

The narrow width of a soundbar impacts the imaging of the audio. It may sound like everything is coming from one point instead of a wide soundstage. Because of this limitation, some soundbars rely on features like simulated surround sound using software-based audio processing or bouncing audio off nearby walls and ceilings. If your room is not rectangular, these effects can fall flat and even diminish audio clarity.

All movies and most TV shows are recorded and mixed in surround. By going with a surround sound setup, you get to hear how they were originally intended to be heard.

There are nearly unlimited combinations of speakers, subwoofers, receivers, stands, cabling, and accessories to choose from – giving you full control of your audio system. You can upgrade specific components at any time while still utilizing most of the system. You can go with the standard 5.1 setup or delve into more exotic setups that use speakers in the ceiling for a three-dimensional sound.

At the heart of a surround system is the receiver. Even the most entry level receivers have multiple audio inputs which allow you to connect every audio device you may own.

Though the sound quality of a proper entry-level surround sound setup is going to be superior to a soundbar, there are budget all-in-one surround solutions that may sound worse than soundbars. The cost of a surround sound setup is unavoidably more expensive than any other audio solution due to the amount of equipment needed. The more audio channels you have in the system, the more cabling, stands, and power you will need.

The amount of space needed for all the equipment can become an issue if you’re in a small space. There’s a significant amount of planning that goes into setting up the system correctly and routing all the cabling. It can be a bit paralyzing to choose all the components and figure out how it’s all going to work if you’re not knowledgeable or do not want to hire a professional installer.

Powered stereo speakers are priced well compared to surround sound systems and higher-end soundbars, while providing similar or better sound quality through their two audio channels. Most powered speakers are designed for accurate audio reproduction, while avoiding gimmicks and complexity found in soundbars. Being able to have a dedicated speaker on either side of the TV creates a wide stereo soundstage without relying on software-based audio processing.

Powered speakers are relatively simple to set up requiring a few cables, at most, to connect the two speakers to your TV. The amplifier is built into the speakers meaning you do not require a separate receiver. They accept nearly any audio device including turntables and smart home devices with their varied selection of audio inputs. They can be a hub in a smaller home taking care of all audio duties – no matter the device.

The build quality and materials used are generally a step up from the all-plastic chassis found on soundbars. They can come in a variety of colors and finishes giving your space more personality.

Powered speakers are more expensive than entry level soundbars. They are not as compact and will take up more room, while being less flexible in how they can be incorporated into your space.

Most powered speakers do not have an HDMI connection which means you will need a separate remote to adjust volume. You also need to ensure your TV is setup correctly to send a or stereo signal as powered speakers cannot accept surround audio.

There is a misconception that surround sound is the only way to get an immersive home theatre experience. One could argue that better sound quality will be more immersive than multiple channels of audio that aren’t as accurate. If you’re struggling to hear fine details or the audio does not sound realistic, it really doesn’t matter that you’re hearing it from multiple speakers.

Generally, all movies and television shows have a stereo mix along with a surround mix. The stereo mix is intended to be used with two-channel systems. If you have stereo speakers and you have chosen the stereo mix you shouldn’t lose any detail.

The second reason is a properly set up stereo speaker will have a “phantom” center channel. If both speakers are playing the exact same thing it’ll sound like audio is directly in front of you. Even without a center channel, you’ll hear dialogue exactly where it should be.

The benefit of a center channel is that you don’t need to position your speakers correctly to have dialogue in front of you. You don’t need to sit in a sweet spot like you may need to with a stereo setup. 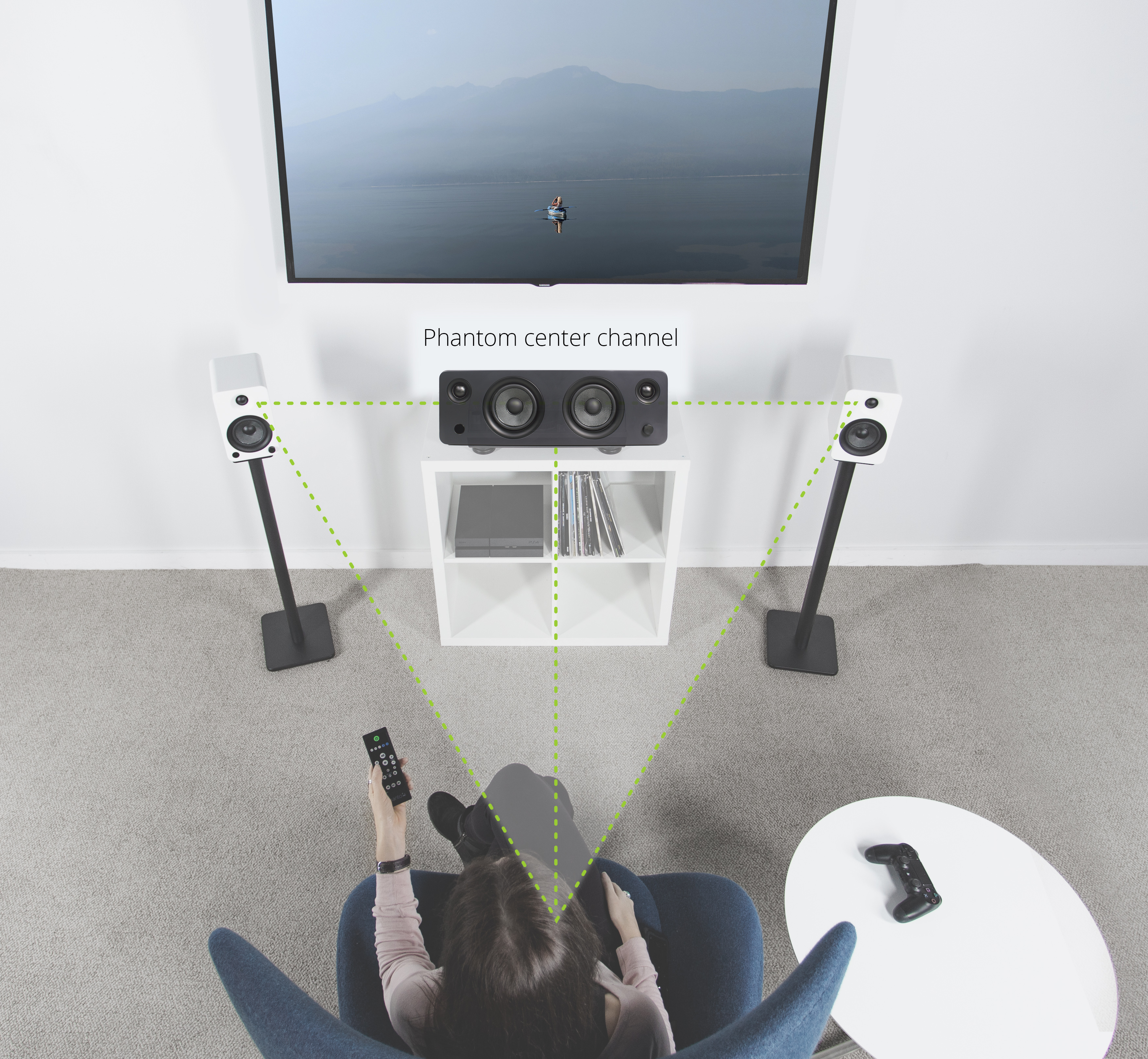 
Although there are many different factors that will determine which setup is right for you, we’ll focus on the four main categories that have the most influence:

There are certain factors that both soundbars and surround sound setups excel at, but they usually have one factor that is heavily compromised compared to the others. As you can see from the chart above, powered speakers sit in a sweet spot between them balancing price, complexity, size and sound quality.

If you’re already considering upgrading your TV’s sound, then it’s obvious that good sound quality is important to you. Although soundbars are well priced, easy to use, and don’t take up much room, the feature on soundbars that is often the most compromised is sound quality. On the other end of the spectrum, a surround sound setup will deliver great sound quality but is expensive, complicated, and takes up a lot of space. Powered speakers are an all-around great choice to improve upon your TV’s stock sound. With so many models and colors to choose from, you should be able to find the pair that’s perfect for your home.

We love to see how you’re enjoying your Kanto speakers. Send us a picture of your setup on Facebook or Instagram with the hashtag #kantoaudio.